Happy holidays to you all! I'm not taking leave until later, after the main Christmas and New Year's rush, but it'll be nice and quiet and almost like being on leave for the next 2 weeks . . . except of course for writing apocafic, like you do.

I belatedly signed on for

fandom_stocking so am busily making a few treats. *g*

Whew - I'm actually there with the main raft of challenges!

goddess47 . It ended up at almost 25,000 in the end. It's about the team forming a sedoretu à la Ursula le Guin's poly-marriage trope, and was a ton of fun to write.

I got a charming pre-slash John/Rodney fic from ionamcbee called Truth or Dare, in which J&R and friends play an adult-rated game.

My due South Secret Santa story's posted and they're all due for reveals very soon (exciting!), and I also posted my main Yuletide fic plus a Yuletide treat for one of the pinch-hitters, in the same fandom. Poetry FTW!  :D

I'll go have dinner on the 25th with my aunt, uncle and cousins - luckily the keto diet adapts excellently to Christmas dinner - roast fowl and then strawberries with lashings of whipped cream, tra la la!  (status report: 26 lbs lost in 3 months).

And here's a fun Christmas pic that's been doing the rounds. Way to piss off the neighbours! 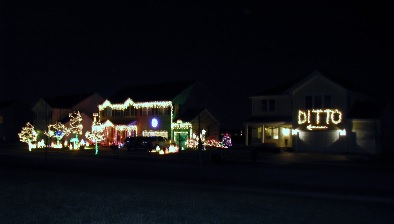