Torrential rain here - literally like some delinquent rain god was straddling the house upending a 20 foot tall bucket of water. And cold, dammit. The good news - no major roof leakage which given the gently decaying state of my house (sliding inexorably down the hill into the bush because I don't dare investigate the piles) was a relief. And thunder that went on and on like something large and scary was pissed off and having an extended rant. My heat pump hasn't kept up so there's been huddling under fleecy blankets.

Possum the cat has mostly been sensible (current favourite spot: the laundry bowl above a heater) but he likes getting wet so has needed toweling off a few times. Note: the garbage bag behind him contains no actual garbage, just surplus clothes for the Op shop. If it ever stops raining. 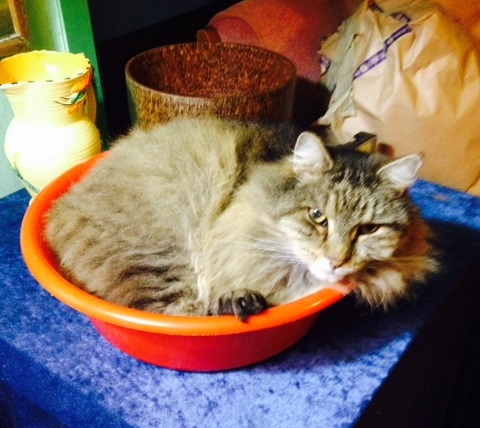 Last week work imploded with insoluble problems and people fighting nastily over inadequate resources and I was desperate for the long weekend (Monday was Queen's Birthday holiday, good old queenie).

I'm reading and REALLY liking all of plaidadder's Sherlock/Sherlock Holmes stories. I wax and wane with Sherlock fic - went through a phase, then went off BC due to overexposure, but if the writing's good it still works for me. And she can PLOT. Oh, and

I know you're all totally used to having Netflix but we've never had it in NZ until recently. I now have an allied thing called Lightbox which works well on my previously despised (why did I get one without 3G connectivity, was I insane?) Samsung tablet (now 2nd MVP after my phone). So I'm catching up on TV shows I never had time for before (huddled under fleecy blanket). Absolute faves to date are Justified (Timothy Olyphant woo-hoo! Elmore Leonard!) and Orange is the New Black. Am also watching Outlander but recently avoided it due to the extended rape and torture scenes, which were ghastly and overdone. The relentless het's a bit tedious as well, as being in fandom has it seems forever changed what turns me on (that would be slash), and sex scenes that don't turn you on are just annoying. Watched much of Teen Wolf (to end of Season 3) and now I get where a lot of the fanfic and art's been coming from and am very fond of Stiles and Chris and quite fond of Peter and Scott, but have gone off Derek, which puts a dampener on the Sterek.

librarychick_94 's recordings - mostly SGA and a few H-5O coming up (all on my AO3). Am also charging ahead with my Dief-centric Due South/C6D Big Bang primary work (a comic) and really enjoying it. Of course it's not due until October so playing with it's just good old procrastination in disguise. Starting to feel panicked by the need to wrestle a plotty outline into being for my Ante Up Losers Big Bang story. Not to mention my Satedan Grabass Ronon/John one which is due in 4 weeks. I have the bunny for that one though and it's not a long fic, so that'll be okay.

In other fannish things, I recently reccd Only Lovers Left Alive fanart over at

fanart_recs which was fun (gorgeous stuff), but this month I said I'd do Outlander, and have since gone off it, as above. Will soldier heterosexually on, however, but what I'm REALLY looking forward to is reccing Mad Max Fury Road fanart in July, woot! And of course seeing the movie eventually. If it ever stops raining.
PS: my one luvvie-alert claim to fame is that I'm related through inlaws to Bruce Spence who played the gyrocopter pilot in the original Mad Max II.